The links above go to the other parts of this section that you're probably more interested in. You know, cute kitty pics and... well, that's probably the only one. But if you really do want to get a little more info about me, below are some lies, and some truth. The first person to figure out which is which will win the satisfaction of a job well done! 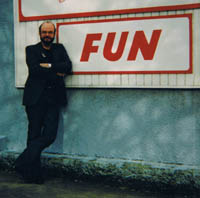 Brad W. Foster is an enigma to all save the tax man, who isn't fooled by anyone! He comes from a long and distinguished line of European royalty (though they will deny it, and have gone to great pains to erase his name from the family tree, but it is true, so there!). Like many, he fled from Europe during the war. Which war is still up to conjecture, due to the liberal use of plastic surgery and body enhancing (or de-hancing, as the case may be) implants. His devotion to this attempt to disguise his connection to his privileged background is most evident in the fact that, while possessing a glorious mane of luxurious hair, and the rippling physique of a world-class bodybuilder, he has had the majority of those hairs plucked one by one from his head, and is involved in a constant battle to hide his washboard-muscled stomach under an impressive gut.
Turning his back on the fabulous wealth and power that were his by birthright, he opted instead for the life of the artist. He discovered he had a real talent for laboriously tracing drawings out of old books and magazines that he hoped no one would remember, and fobbing these off as his own original creations. It took him mumble-mumble decades to get his first gallery showing in a trendy New York City salon in the heart of Soho. Within an hour of the opening, he was beaten severely ( both literally and figuratively) by the critics for what they referred to as "An unforgivable lack of any talent whatsoever."
Eventually coming to realize that just possibly the world of fine arts was not yet ready to accept his amazing visions on canvas (or paper, or cardboard from the inside of tissue boxes, or whatever was free and available to draw on), he turned his incredible talents to the world of so-called "commercial" arts. Here he found a bit more acceptance, for the pioneering art directors and editors of those early days had the vision to recognize a unique and truly earth-shaking talent when it presented itself– plus Brad would work for much less than any other artist they knew. One company in particular decided to make him their number one cover artist. Soon his ground-breaking style of combining delicate oil washes over liberally smeared crayons was gracing the covers of more than a hundred paperback novels from One-Hand Library Books, with titles like "Hot Sex Nympho Librarians on the Beach" and "Hot Sex Nympho Nurses in My Bed", not to mention their most popular title, "Really Hot Sex Horny Nympho Nurse Librarians With Really Large Breasts" (the trilogy). But, good times don't last, and changing publishing fortunes caught up with One-Hand (along with the legal authorities). Brad was fired when readers (if such they can be called), began complaining that his naked women "just weren't nekkid enough!"
Thus he was forced into the lowliest of artistic forms, that of drawing for science fiction and fantasy "fanzines". But he vows to claw his way up to the middle-bottom of the heap, and is working on a piece he has tentatively titled "Really Really Really Hotter Than Hot, Oh Boy, This Is Some Sexy Stuff, Nympho Stewardess Nurse Librarians From the Planet of Humongous Hooters". The man is just slopping over with talent, and it's only a matter of time! 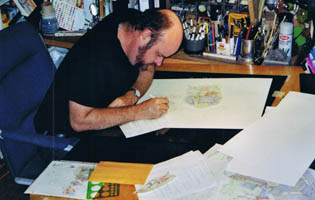 .....Okay, so that's just silly. The real story is that Brad was born with a pen in his hand (causing no end of discomfort to his mother). Unfortunately, though he started out from day one with such a huge head start in the art world, it took him several decades to figure out just what this strange pointy thing was for. After an embarrassingly short career as a professional darts player, someone stopped laughing long enough to explain the concept of ink to him, and he was on his way! The rest, as they say, is a tiny footnote to a sidebar of history. Since that time he has managed to bribe enough editors to appear in two and a half semi-professional non-paying publications, not to mention--well, let's not mention that.

.....Oh, yeah, that's much better than the first one! If you want the straight skinny on this guy, listen up! Brad was indeed born, but anything normal about his life ceased almost immediately after that event. Kidnapped out of his crib by a wandering band of renegade street surveyors, he was brought up in a strange cult of lines, angles and digital watches. Eventually striking out on his own, the young Foster got a job as a night watchman at a digital watch factory. Unfortunately, one morning his boss got to work early and discovered Brad sprawled in a strange stupor on a huge pile of dismantled watches. Details of exactly what he had been doing have been tastefully removed from police records, but then Foster himself was also removed. Little is known of his whereabouts until years later when he resurfaced in Texas, where men are men and watches are digital. Still haunted by his previous work record, he found employment of a sort by doing drawings of dismantled digital watches for the bizarre underground network of books and magazines devoted to this not-so-great American fetish. 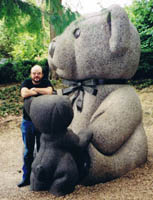 .....Geez, this is getting scary! Where do you guys come up with this stuff? All I know is that Brad W. Foster (or, as he is known in the truly trendy art circles of the world, "Who?") tends to handle a pen with the same deft flourish that most people show with blunt instruments, and usually with the same haphazard results. To get past this admittedly difficult obstacle in his path toward being an artist, Brad has come up with a remarkable solution. Basing his idea on the famous theory that an infinite number of monkeys at an infinite number of typewriters will, given enough time, write the complete works of Shakespeare, he obtained a research grant from a large Eastern university (not in this country, further east). With this money he was able to obtain several million monkeys, and supply them all with chairs, drawing tables, pens and paper. They are all housed in one really amazingly huge warehouse deep in the trackless wastelands of West Texas, and by making several trips there each year, he has discovered that, indeed, the law of averages nicely supplies him with enough recognizable artwork for him to sign and pass off as his own. He now plans to apply for a federal grant (where the big bucks are) that would allow him to buy several million typewriters and have the monkeys get started on his first mainstream novel. Actually, you have to admit it's all quite clever for a college graduate!

Okay, so maybe it's time for a few real facts (mostly), instead of just made up ones...... 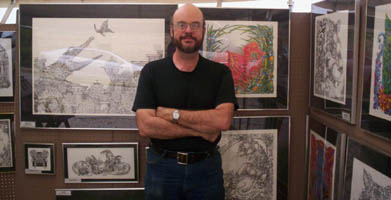 Brad W. Foster, international jet setter and ex secret agent, sometimes dabbles in pen and ink. This tends to get him very dirty, and his friends avoid him at all the "right" clubs. However, other times he uses a pen almost correctly, and makes strange little pictures on paper. These have somehow managed to make their way into the hands of various publishers of, appropriately enough, various publications. This has resulted, at the last count, in his work having been published in literally over 3,000 diverse books, magazines, posters, prints, cards, and a little of everything else! Aside from the hundreds of science fiction fanzines to have used his work, magazines as broad-ranging in subjects as Amazing Stories, Highlights for Children, and Cavalier have carried his illustrations. (The man is nothing if not diverse in his choice of subjects!) He has illustrated computer instruction books, a children's picture book, an over sized coloring album, advertising posters, role-playing games, book covers, comic books, and much more. He has started up and is still running his own small press publishing house, Jabberwocky Graphix, from which he issues a line of fine-art prints and art collections. He and his lovely wife Cindy travel around the country to show his work at various juried art festivals, as well as science fiction and comic conventions, cat shows, and they even participated in a two-month Renaissance Festival deep in the heart of Texas for eight years, though he eventually got over that.
Brad will draw for just about any reason or excuse, and found in science fiction fandom a group of folks who welcomed his output of odd illustrations and cartoons. Artworks done purely for the enjoyment of the creation of the work, with no thought toward "payment", found the perfect home in SF fandom. And not only have these folks been kind enough to print his weird doodles and then send him free copies of those magazines, they've also been nice enough to bestow eight Hugo awards on him for, basically, just having fun. He hopes to move on to new worlds with his art--he and Cindy are slowly developing a huge cast of characters for a new project that will combine his fine art and comic-book sides, and there are always new prints and strange art projects planned through Jabberwocky Graphix. But in the meantime, and for all time, he'll continue to draw whenever he can, just for the fun of it.
His motto says it all: "Leave no piece of paper blank!"
Main Page | Site Map Flow Chart | Full Site Index | Alphabetical Title List | About Jab & Brad | Show Schedule
"Your Inner Robot" | FAQs | Artworks by Foster | Comics & Zines | Contact Info and Mail List | Order Forms

The Official Stuff! Jabberwocky Graphix.com, Brad W. Foster, all art, words, images and such like stuff contained anywhere and everywhere on this site are copyright © Brad W Foster, who would really appreciate it if you didn't copy this stuff anywhere else without asking him about it first, since this is how he tries to makes a living, so if you like his stuff and want to see him create even more, you'll not spread around the stuff already done for free. How's that? You can always write Brad anytime at jabberwocky2000@hotmail.com with any questions. Oh, and you can click here for my thoughts on the whole copyright thing!